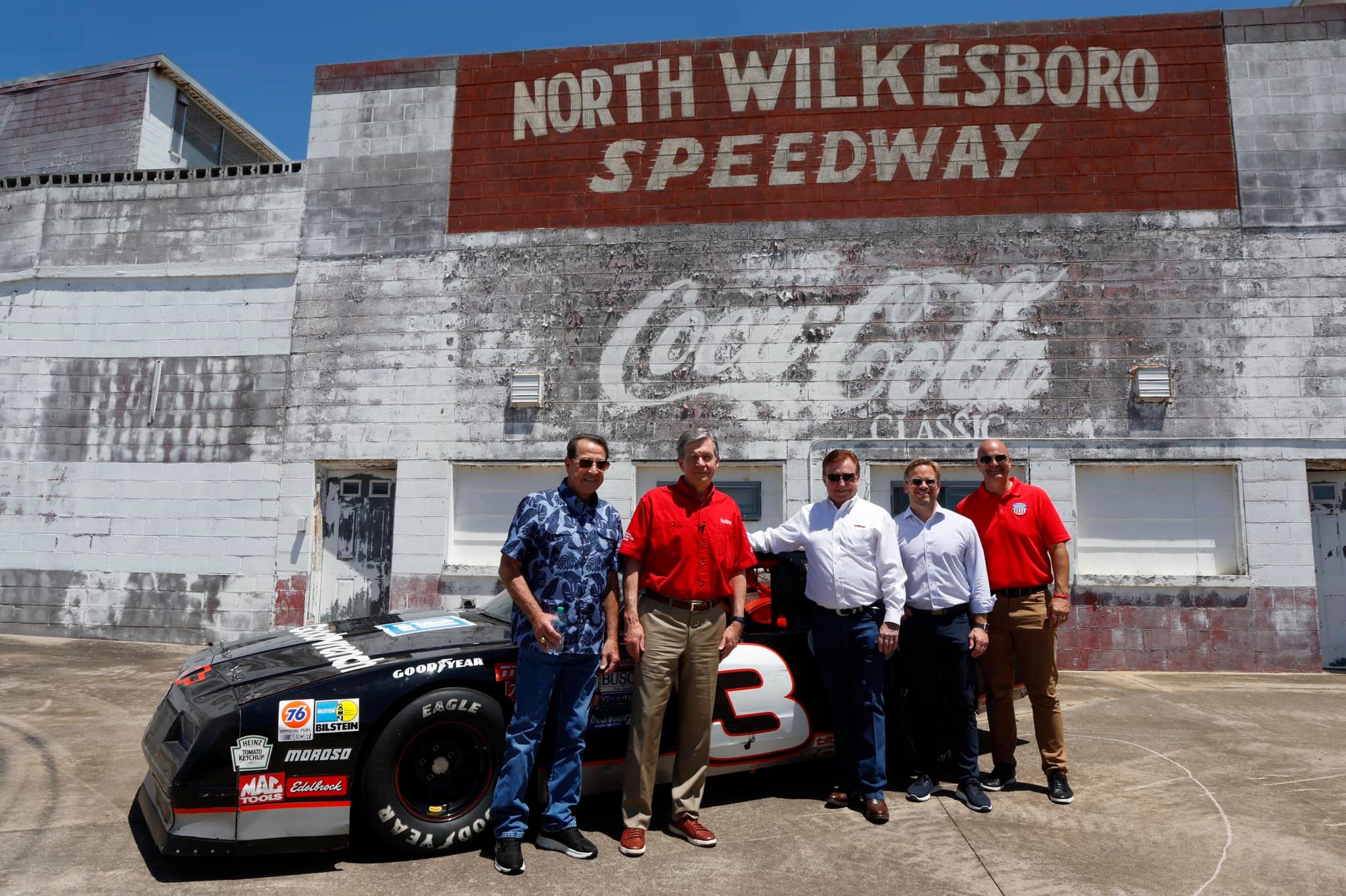 May 17, 2022- Doug Rice, President of the Performance Racing Network, welcomed the group to the 75th Anniversary of the North Wilkesboro Speedway- which originally opened on May 18th, 1947 with a Dirt Modified race. North Carolina Governor Roy Cooper, State Officials, Speedway Motorsports Representatives and Community Leaders were in attendance at this event in 2022 celebrating the future of the facility. Marcus Smith of Speedway Motorsports spoke to the group about his excitement for the revitalization of the speedway. He stated that the overwhelming local effort supporting this effort was a real testament to an amazing community. In 2020 Smith had a conversation with racing legend Dale Earnhardt Jr. about getting the speedway onto the I-Racing network, which was once again supported by local efforts. These things came together to spark an initiative to bring back the North Wilkesboro Speedway, an effort which snowballed after the announcement from Governor Cooper designating funds to infrastructure improvements at the facility. Plans for the speedway include restoration that keeps the historical flair intact.

Then, Secretary Reid Wilson of the NC Department of Natural and Cultural Affairs made an announcement about plans for a Moonshine and Motorsports Trail in North Carolina. The trail will help preserve motorsports and distilling culture, while promoting businesses currently in those industries. The department will partner with many organization across the state during this initiative. The trail is set to be launched in January of 2023, which is officially 'The Year of the Trail' in North Carolina.

Governor Roy Cooper excitedly spoke about the rejuvenation of the Speedway and seeing the project come to fruition. Investing in the speedways and dragways across the state was planned in the revitalization efforts for the state's economy and tourism after COVID. He recognized the efforts of everyone involved both on a local and state level, including the Wilkes Economic Development team who worked with the state budget office on this project months before its announcement. 'We Got You Back' rang loudly across the crowd before Governor Cooper was presented with a personalized one-of-a-kind retro racing jacket by Marcus Smith.

On May 18th, 2022 the public is welcome to come to the North Wilkesboro Speedway for a 75th Anniversary celebration.

For full video of this presentation, please click here.

Marriott International awarded the franchise for building the 104-room hotel on Spectrum’s property behind the Olive Garden Restaurant on U.S. 421 West.

Spectrum Hospitality develops and operates hotels in the North Carolina and South Carolina. This will mark the fourth and fifth hotels owned by Spectrum in Wilkesboro.

The duel-branding allows for two hotels to occupy one building. "That allows the property to offer both long term stay rooms with kitchens and other features that meet the needs of longer stays and rooms geared for shorter stays," said Dale Isom of Spectrum Hospitality.

It will feature an indoor saline pool, large 24-hour fitness center, outdoor recreation areas and a small lounge on the top floor with views of the Brushy Mountains “and many other modern amenities,” said Isom.

It will also have “an upscale lobby and meeting spaces, upscale guestrooms that provide comforts and features that allow the guests to be productive during their stay and have a great night’s sleep,” he added.

“We are extremely happy to make this announcement for Wilkes County. We currently own and operate both a SpringHill Suites and a TownePlace Suites by Marriott in Mooresville and we look forward to bringing a Marriott branded property to Wilkes County”, said Isom.

“With our ownership group being all local folks, growing in Wilkes County is one of our top priorities. We believe this hotel will allow us to meet both current and future needs of local businesses and the traveling public.”

The new hotel is being designed by Isom Ham Design Group (IHDG) PA, a local architectural firm that has designed over 600 hotels over the past 34 years.

Spectrum Hospitality owns and operates two hotels in Wilkes County - the Hampton Inn by Hilton and the Holiday Inn Express by IHG.

“Plans are being developed for the future of the old Holiday Inn as we plan to renovate the hotel and make it a very nice property”, said Daniel Isom, president of Spectrum Hospitality Management LLC. “We have lots of options open to us presently and we are working to make sure that this landmark hotel will have a place in Wilkes for many years to come.”

Interview with Mick Zulpo: The Block

May Small Business Spotlight: We sat down with Mick Zulpo, Owner of 'The Block' in North Wilkesboro. The Block is a Family Entertainment Facility offering Roller Skating, Trampoline Park, Ninja Warrior Course and more! Mick also shares that his desire, along with his wife Aynsley, is to create a community oriented center that offers a diverse range of services for children beyond just play. Learn more about that, and hear his advice for Entrepreneurs in this month's Small Business Spotlight. Reserve your spot at The Block by visiting www.TheBlockWilkes.com To learn more about starting a business, visit www.WilkesEDC.com/contact 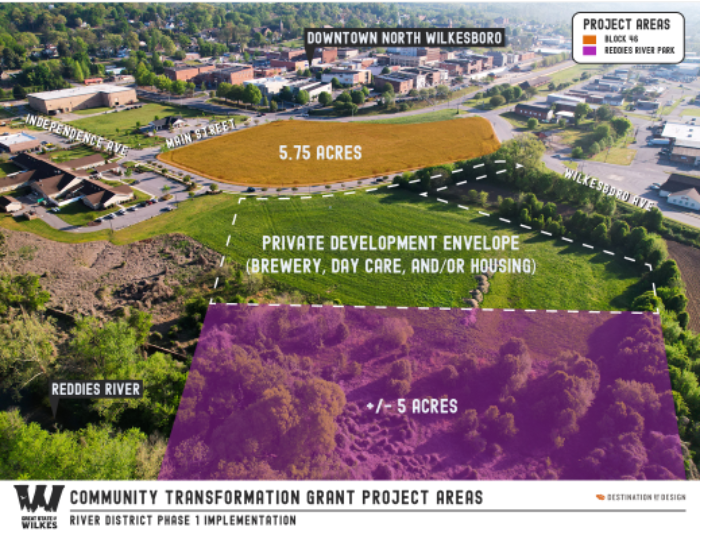 North Wilkesboro, N.C. (May 4, 2022) – Lee Herring, President of the Leonard G. Herring Family Foundation, and Craig DeLucia, President of NC TechPaths, Inc. and CEO of Herring’s organization, announced that their two nonprofits have purchased the remaining undeveloped land on the former American Drew Furniture site in North Wilkesboro. Known locally as “Block 46,” the land consists of over 14 acres adjacent the Reddies River and has been vacant since the site was demolished in 2011.

“We need a place for NC Tech Paths to build a modern workspace for 200 to 300 technology employees of high-growth companies over the next five years,” said Herring. “Our community also needs more housing, as its absence is the primary barrier for our economic growth. Our intent for the site is to address these two needs. As well, our initial planning for the land includes recreational use of the Reddies River which adjoins the site.” Herring further noted that “Childcare and a greater focus on individual health and wellness, as well as other amenities to support the good-paying jobs generated through NC Tech Paths, are also needs we will explore for this property.”

The Wilkes EDC Entrepreneurial Grant Program provides funds to Existing Businesses for Expansion, and those who plan on Starting a Business in Wilkes County. Applicants are asked to submit a SIMPLE business plan that describes how the grant funds will be used to grow or start their business as well as a 3-5 minute business pitch video of their request. Selected Participants will give a full presentation to a panel of judges.  Award winners will have one year to draw down grant funds allocated to their project.

The Wilkes Community College Small Business Center is available to all applicants for assistance with their business plans. The Wilkes EDC's Marketing & Content Manager can provide help with videos.

Submit your Application as soon as possible to be enrolled in the Program. Next you will be provided with a Template for your Business Plan and Financial Summary to complete, and information on recording a Video Pitch detailing how you would use the grant money.

Your application is not considered complete until you submit your Business Plan and Video Pitch.

Please understand that any business that submitted an application whether approved or not, cannot be guaranteed any grant proceeds or other benefits from this project. The EDC is not endorsing any applicant by way of this project and thus no such claim should be made.